We believe that TUNDRA were the first to start an ETHICAL program that relates to Down Collection-Working Standards and methodology-Employment Rules.

In the later part of the 20th century most down filled products, clothing, Quilts and Sleeping bags were made in Northern Europe and Northern US and Canada, In Europe as the cost of labour grew production became concentrated in Poland and Hungary. These countries also concentrated on the collection of down and in farms were developed that kept ducks and geese for breeding. This led to the opportunity to collect high quality down from the nests of these birds when the moult up to four times a year.

Importantly as the birds are kept for breeding they are mature birds typically four or more years old and by this age the down clusters from the breast of the birds have fully developed.

Around the start of the 21st century China who had always been the world’s largest source of down started making products itself. This created an even higher demand for down and new ways were found to satisfy that demand with Down and Feather becoming a by-product of the food industry or collected by live plucking or jet spraying of birds. 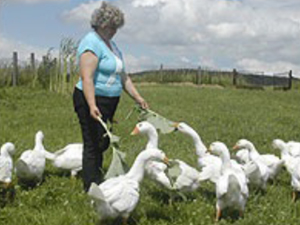 After the outbreak of SARS in November 2002 the Chinese Government issued the photograph below to assure us they were taking steps to contain the spread of the disease.

This however also alerted us to the methods used in China to collect down from birds. The use of a “Jet Wash Wand” does not seem to us to be very kind to the birds, nor do the conditions they are kept in.

Next page: Our Employees →

Buying from the United States?

We have specific information to help you with your purchase...