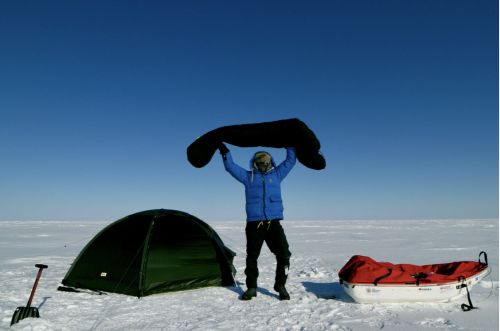 The admittedly-unusual job title of “adventurer” means that my exploits often land me in dangerous places. I planned this trip to cross Siberia to start in late January 2002 and little did I know what was about to happen in that part of the world.

I suspect it is very rare that an expedition goes 100% to plan. There are always snags along the way. Some are foreseeable and some are entirely unforeseeable. With hindsight, it seems that Russia’s full-scale invasion of Ukraine was somewhat predictable, although very few commentators thought so at the time. And so it still came as a shock to me when the Russian army swept into Ukraine just three days after I landed in Yakutsk. Besides being horrifying, this was definitely a spanner in the works.


However, I was well over 3,000 miles from the war and felt sufficiently distant to continue with my journey. A more pressing concern was the 80cm of uncompressed powder snow that blanketed the Lena River after an entirely windless winter. Dragging a heavily-laden sled, I spent three days contending with these energy and speed-sapping conditions before accepting the futility of trying to continue for the 1,000 miles I’d planned.

Forced to re-assess, I quickly devised a new plan which would take me 600 miles along a seasonally cleared “ice road” on a different river system but which would still deposit me at the same end destination; the port town of Tiksi. Crucially, this new route would bring me into contact with a similar number of equivalent indigenous Siberian communities.

I flew into the small Arctic town of Batagay, re-packed my sled, and started walking. For the first three weeks, the temperature rarely rose above -30ºC and the nights were as bitterly cold as I’d anticipated. The coldest temperature I logged on my thermometer was -49ºC. I rolled onto my side in the tent one morning to read this bracing figure. I eyed the thermometer through the tiny drawstring face opening of my Tundra Arctic Elite sleeping bag.


What struck me most was not how cold it was, but how I’d woken up to see this, rather than having already lain awake and shivering for several hours past. The specification of “-50ºC rated” was clearly no idle boast! The centre (as opposed to side) zip arrangement meant I could stay almost entirely within the vast down cocoon while preparing my coffee and porridge. Of course, within a few minutes of packing my Tundra sleeping bag away and starting to take down my tent, I was thoroughly cold. I spent many of my days walking along the river feeling the cold in various parts of my body. But the nights were cosy.

The hiking was mostly peaceful and often sublime in the vast quiet wilderness I was crossing. The visits to the villages were enjoyable and informative. I chatted with fur hunters and reindeer herders and horse breeders and elderly Slavs who were dumped out in Siberia during the Soviet era. People were welcoming and polite and, most of all, keen to know my thoughts on the “Special Operation” in Ukraine. Most people seemed aware that there was a different version of events being broadcast outside Russia. Most believed the Kremlin’s stories, a few secretly didn’t, and some weren’t sure what to think anymore.

My two-month walk culminated in a peaceful two-week stint hiking on the frozen ice of the Laptev Sea; part of the Arctic Ocean. I was rarely more than ten miles from the shore as I traced it westwards towards Tiksi, gazing at the forbidding black cliffs guarding the north coast of Siberia. The nights camped on the sea were bewitching. Northern lights danced and shimmered in the inky, star-speckled blue that yawned above a horizon still fiery red from the setting sun.


Soon after I plodded into Tiksi and reached the journey’s end, I was arrested and tried on the spurious allegations of “conducting unsanctioned journalism” and “photographing restricted military sites”. I was flown back to Yakutsk and locked in a cell for a month before eventually being deported. As I say, nothing ever goes entirely to plan on an expedition and this was no exception. But I enjoyed the challenging personal experience and the interactions with remote people that I’d gone to Siberia for. I now count myself lucky that I’m home and able to plan my sleeping bag’s next Arctic outing rather than still twiddling my thumbs in one of Putin’s prisons.

We use only the very best down (FP880+ euro) which comes from farms where the geese and ducks swim on ponds and rivers living in natural conditions.