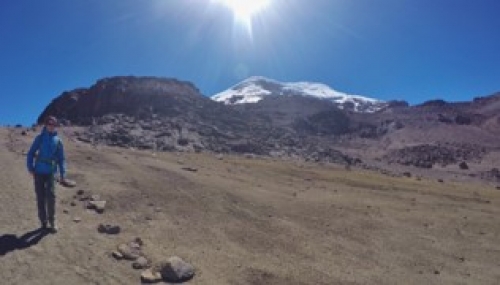 Even if we can only claim this on a technicality, it is not entirely false. The summit of Ecuador’s Chimborazo (6,310m) has the unique distinction of being the furthest point on the surface of Earth from our planet’s centre.

Due to Earth being an oblate spheroid (or a squished ball), its diameter at the Equator is significantly larger than that through the poles. This means that Mount Everest’s relatively northern position puts its summit almost 2km closer to the Earth’s centre than that of Chimborazo. By this criterion, you need not struggle all the way to Chimborazo’s snow-laden summit to go ‘higher than Everest’, but merely complete the high-altitude Circuit Trek, which tops out at 5,000m.

The breath-taking Chimborazo Circuit Trek, however, needs no such trivial claim-to-fame to qualify as one of the world’s great treks. Completed in 4 days, the trek around the vast, extinct stratovolcano takes in an astonishing variety of environments, from cold and wet Alpine terrain to sun-baked desert. With empty trails on the first three days (before joining the throng of day-trippers at the final refuge), Chimborazo offers a wilderness experience of rare beauty and scale. We hope the below not only encourages you to attempt the trek, but helps keeps you smiling and safe throughout.

Any trek going to extreme altitude needs to be taken seriously. Before heading anywhere near as high as 5,000m, you will need to familiarize yourself with the symptoms of Acute Mountain Sickness (AMS) and plan accordingly. Have in mind at all times that you will be happy to retreat off the mountain if required. A steely determination to complete the trek can lead to dangerously poor decision-making. As the central spine of Ecuador is largely at or above 3,000m, it is a very easy country in which to acclimatize. Shorter treks in the regions around Quito, Otovalo, Quilatoa or Cotopaxi provide the perfect opportunities to get used to the altitude before heading even higher.

Ecuador is home to many internationally qualified mountain guides, so chose a reputable company and stack the odds on your favour.

Day one sees a gradual rise on old, rural tracks from 3,300m to 4,000m, climbing from small farmsteads to alpine meadows. For us, the increased exposure at 4,000m led to a noticeable drop in temperature, with the moderately warm and humid valleys giving way to the cold winds of the high plains. We overnighted in a frigid (but dry) mountain refuge and enjoyed the first full views of the colossal Chimborazo.

Day two could have been December in the Scotland Highlands. Rain, sleet and snow dominated the day as we moved on good paths through semi-flooded, moss-covered plateaus, over a pass at 4,400m and finally down to a mountain refuge at 4,200m. The sun came out in the late-afternoon, affording some of the most spectacular mountain views imaginable, as well as a chance to thoroughly dry all our kit.


Day three started with us walking out of a curtain of sleet and hail directly into the rain-shadow of Chimborazo. The height and prominence of the mountain means it generates its own weather systems and I have never seen such an abrupt change in environment. In the space of a couple of hours, we moved from grass and moss-covered pastures to a beautifully desolate, red Martian landscape.

The rest of the day was spent trekking in blazing sunshine alongside wild Vicunas (seemingly a cross between Llamas, Alpacas and Star Wars’ Jar Jar Binks). We overnighted at a very well-appointed refuge at 4,800m.


Day four offered the chance to wander up to the Whymper Refuge at 5,000m (named after Edward Whymper, the British climber who, in 1880, made the first ascent of Chimborazo with the help of Swiss guides). The short walk up offered unbroken views of the huge snow fields towards the summit, again under clear blue skies.

Given the incredible variations in weather on the mountain, packing for Chimborazo is not the easiest job.

Day one demanded standard UK Autumn attire, with long-sleeved base-layer T-shirts, trekking trousers and light windproof jackets supplemented later on by fleece mid-layers. Evening in the refuge was seriously cold, with synthetic insulated pants and down jackets being worn before getting into our 4-season sleeping bags (it was below freezing in the exposed and windy attic dorm room).

I used a Tundra Pure -10, twinned (zipped onto) my other half’s Tundra Pure -20. Despite being a Canadian, she suffers terribly in cold weather, so the extra warmth on her side worked perfectly.

Day two was a full Gore-Tex day, with insulating layers underneath. Overnight was in another unheated hut at 4,200m, so, again, climbing into Tundra’s cloud of down at the end of the day was a real highlight.


Day three started in the same vein as day two, but, by lunchtime, we were trekking in shorts and T-shirts. The most important considerations were sun cream and sun hats. The sun is never more damaging than at altitude on the Equator and, though the cold air temperature made wearing beanies seem bearable, the resulting high temperatures on the tops of our heads could have easily led to heat injuries.

The author travelled with www.ecuadortreasure.com

We use only the very best down (FP880+ euro) which comes from farms where the geese and ducks swim on ponds and rivers living in natural conditions.